A colleague at work has just abandoned we cubicle rats for a month to vacation in the hot Italian sun. She has spent the past two weeks reminding others of this fact; and although I keenly do the same when it’s my turn to escape abroad, I’m no less aggrieved and envious when left behind. But why be jealous, really? Sure, Frommer’s says nice things about it; but Italy isn’t all Sistine chapels, olive-skinned supermodels, or linguine heavenly enough to make Julia Roberts swoon. And I’m sure that more people die on wobbly Vespas in Rome than of bee stings here in Canada. So there.

Ok, this isn’t working. I’m obviously in denial. Admittedly, Italy has been on my bucket list for a while, even if my mother tells me it was noisy, dirty and full of pigeons and creepy men who stare. That sounds pretty much like where I live now, or at least no worse. Give me the Vespas. Give me the green pastures, luscious grapes hanging heavily from the vine, warm bread dipped in olive oil, or an impassioned, heart-wrenching Italian aria. Heck, give me lice from sleeping on a dirty hammock, if it means getting to bask in the Mediterranean sun for even one afternoon.

Apparently I’m in need of a holiday and thankfully I have one approaching…though not to Italy. While waiting for my credit card travel points to slowly accumulate enough to cross an ocean, I’ll travel in the meantime by other means: Tonight I made this Italian-inspired dish with pan-roasted chicken, kalamata olives and roasted cherry tomatoes, I savoured a glass of red wine, and listed to Verdi’s La Forza Del Destino while yearning desperately for another continent.

4 boneless chicken breast halves (skin optional, though it tastes better with it on)

2. Mix together the tomatoes, olive halves, capers, 2 tbsp of the olive oil, lemon juice and wine in a medium bowl.

3. Season both sides of the chicken with salt and pepper. Add 1 tbsp olive oil in a skillet or frying pan on high heat. Once shimmering (about 1 minute), add the chicken (skin side down if you purchased chicken with skin on). Cook until golden brown (about 3 minutes). Flip the chicken, then add the tomato mixture to the frying pan and cook together for 3 minutes.

4. If using a heavy, oven proof skillet, place this in the oven, or transfer the contents of the frying pan to an oven proof dish, and cook until the chicken is cooked through or until the tomatoes have softened (about 16-18 minutes). Serve chicken with spooned mixture overtop. 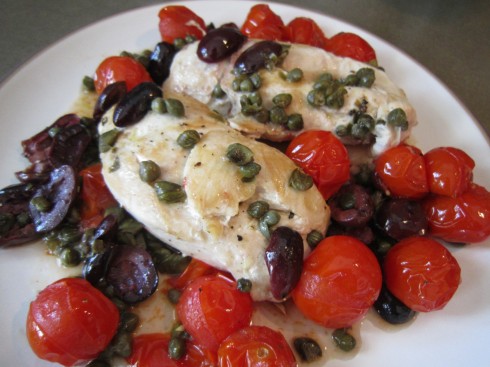 My name is Mike and even though I’m not always a gentleman, it’s safe to say I am in love with food. Like my more famous namesake, the kid on the cereal commercial from the early 80′s, I had an ability to eat just about anything and “like it.” I’ve become a tad more discerning since my toddler phase: I prefer Pinot Noir to the customary Shiraz my parents liked, I no longer eat parmesan cheese sprinkled from a container, and can pick out which ingredients I like or don’t in a recipe by smell alone. I blame my Lebanese heritage, my large Lebanese nose (all the better for smelling with) and exposure over the past few years to some exquisite ethnic cooking styles and cuisine, as well as to some stunning, inspiring cooks who are family or friends. I’ve included a lot of their favourite recipes on this site, as well as a few of my own that have become my staples over the years. I hope you find something here that you like. Happy cooking! END_OF_DOCUMENT_TOKEN_TO_BE_REPLACED
This entry was posted on Tuesday, July 5th, 2011 at 8:25 pm and tagged with cherry tomatoes, chicken, italian, kalamata, recipes, verdi and posted in Chicken, Italian. You can follow any responses to this entry through the RSS 2.0 feed.
« Broiled Salmon with Shiitake-Honey Glaze
Homemade French Vanilla Ice Cream »