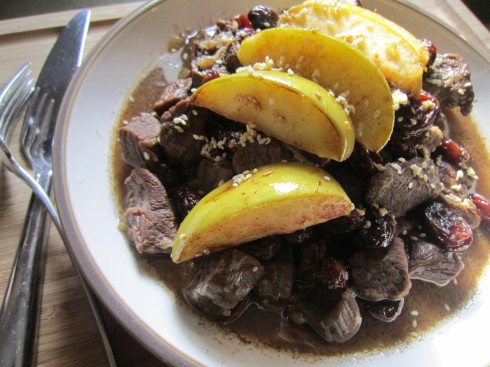 Even before I had visited Marrakech, I had already tasted Moroccan tagine at a local Victoria restaurant and had become enamoured of the unmistakable, splendid tastes of this North African country. A trip to Morocco, however, will imbue any subsequent taste of its cuisine with rich and fond memories that greatly enhance each long-savoured bite.  When I now taste slow-cooked lamb or beef simmered in cinnamon, cumin and honey, or whenever I open up the lid of a hot tagine fresh from the oven, I imagine Marrakech – the magical, medieval city with its labrynthine alleys, with its fruit stalls and monumental date pyramids or its many wooden carts filled with fresh mint leaves, with its colourful tins of bulgur, lentils and dried beans, or its famous night market where each bodily sense of the observer is titillated. 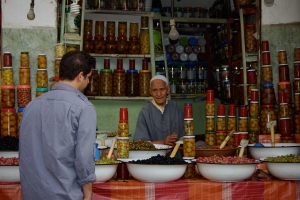 I don’t eat a lot of beef at home, so tend to lean more towards cooking chicken tagine when in the mood for Moroccan. If I have the time, however, I thoroughly enjoy the robust taste of beef tagine cooked to slow perfection with raisins, honey and middle eastern spices. I remember once seeing this dish served with sauteed apples glazed with honey and cinnamon, to lend a pleasant tartness to the dish, so I’ve duplicated it here. I didn’t use a tagine to cook this dish, but you could have just as easily cooked this in a tagine in the oven or stovetop, instead of in a large saucepan.

END_OF_DOCUMENT_TOKEN_TO_BE_REPLACED 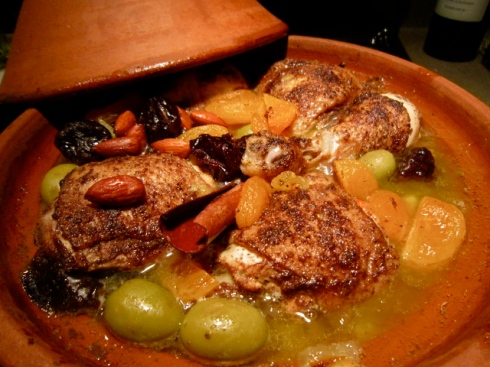 If I were asked what my favourite meal of all time is, I wouldn’t hesitate for a moment to tell you that it is chicken tagine. The taste alone is sublime and the exotic aroma from the spices lingers in my house for days after cooking and brings me back, each time that I walk in the door, to the labyrinthine medieval alleys and stalls of Marrakech souks. To further reminisce during the meal, I’ll usually bake some home-made pita bread and put out small, decorated tagine dishes of olives or apricots as well.

During my travels in Morocco, whether eating under a starry sky with the Bedouins in the Sahara, or crisping on a sunny rooftop patio restaurant, or basking in the unrivalled sensual delirium of the Marrakech Night Market, I dined on lamb or chicken tagine at least once daily – sometimes more. There is no other comparison to this meal. END_OF_DOCUMENT_TOKEN_TO_BE_REPLACED