I’ve had this recipe in mind since before Christmas, but have been waiting for the right moment and the right people to test it on. It’s based on a recipe that my friend Nathalie forwarded to me, though I’ve personalized it with several other ingredients, including beets to compensate for using less sugar and to give it a richer, darker colour, as well as some coconut milk and rum for additional flavours. So much for my resolution to eat better in the new year.

When my friends Daniel and Danielle invited me to Sunday dinner tonight, I knew it would be the perfect opportunity to bring this dessert. Daniel is one of the best cooks I know – each dinner party is always replete with bold, flavourful meals, good Italian wine and lots of laughs. But as he was making chicken tikka with some of his home-roasted and ground marsala spices, I knew that any accompanying dish I contributed to the evening would have to be worthy enough as a following act.

Don’t be scared off by the thought of eating rice for dessert – it’s like rice pudding, but with sinful chocolatey goodness. I guarantee this will be a hit!

END_OF_DOCUMENT_TOKEN_TO_BE_REPLACED 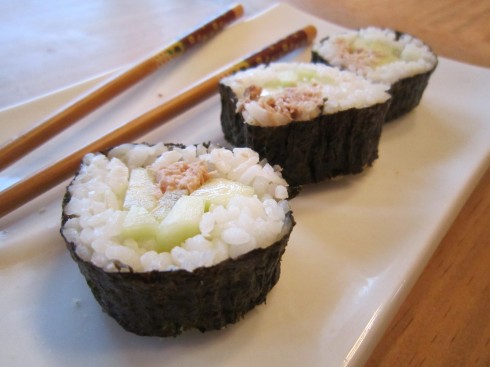 I don’t know what it’s like where you come from, but here in Victoria, British Columbia we have seen some strange health trends over the past few years (Vancouverites, I know you’ll agree): a cult-like obsession with yoga and form-fitting Lululemon pants, a substantial market of people who are willing to pay over $6 for a small loaf of organic bread containing enough seeds to keep the local bird population thriving through the winter…and then there is Sushimania, where the health-conscious pay through the nose for rice, seaweed and fish that the chef was too lazy to cook. Although I do enjoy things Japanese – the food, the tea ceremonies, the culture – and have voraciously read the novel Shogun, I have a difficult time paying such a hefty bill for something so inexpensive to make at home. I do that with coffee already and feel guilty enough.

A Japanese friend of mine showed me how to make very basic tuna sushi rolls which take under 30 minutes to prepare and only cost about $5 for enough rolls to plump up a roomful of hungry Victorians. There are many different ways to prepare Sushi, but this is one of the simplest rolls I’ve found, so it’s a good entry-level dish before attempting the preparation of eel, puffer fish or fish roe that pop in your mouth and set off the gag reflex.

Although sushi is relatively cheap to make, you’ll have to invest in a few inexpensive tools and ingredients that should last you a while: END_OF_DOCUMENT_TOKEN_TO_BE_REPLACED

In the event that you ever need to determine whether or not a person is of Lebanese descent, say if you’re a diplomat, international spy or want to learn a new party trick, there is a litmus test that almost never lies. A Lebanese nose is usually distinctly-shaped; but if that fails, look them in the eye and ask the individual in question about the Seven Spices. No, this isn’t middle eastern code. It refers to a combination of spices that are found, or should be found, in every Lebanese kitchen. It is made up of equal parts black pepper, cinnamon, allspice, ground cloves, ground nutmeg, fenugreek and powdered ginger. One can find these pre-mixed at middle eastern grocers or, if you’re in a hurry and short on ingredients, try the Three Spice version: allspice, pepper and cinnamon, which tastes nearly as good. These spices are an integral part of the recipe below, which has been in my grandmother’s repertoire for 92 years (except for the Uncle Ben rice part, of course). END_OF_DOCUMENT_TOKEN_TO_BE_REPLACED

When I found out that my step dad liked rice pudding, I believe I gave him a look of disbelief. This didn’t sound like something he would eat: he comes from an old-school British background and relies on typically bland food staples, like butter on toast or boiled vegetables – rice pudding seemed too far out of his comfort zone. Apparently though, rice pudding has a long-standing place on British dinner (or breakfast) plates from as far back as the Tudor period. In fact, a little Googling revealed that nearly every culture in the world has some variation of rice pudding in their diet. I had tasted the black rice porridge version in Thailand a few years ago, called Khao Niao Dam, without realizing what it was – and it was delicious. I’ve included this “worldly” rice pudding recipe for my step dad, who in my regard has now moved slightly up the foodie rungs.

1. In a medium saucepan bring 1 1/2 cups water to a boil. Add rice and stir. Reduce heat, cover and simmer for 20 minutes.

4. Remove from heat and stir in butter and vanilla. Serve warm.

Of all the recipes on this site, this one is hands down the quickest and easiest. It is a side dish that I’ve been preparing for over ten years and that I keep coming back to, no matter how my tastes change or refine. Enjoy.

Cooking time of rice: varies depending on the rice

1 can (10-14 ounces) artichoke hearts, drained and cut into half or quarter pieces

1. Cook rice as directed. As it cooks, prepare the lemon garlic vinaigrette

2. Mix rice and remaining ingredients in large bowl, then toss with vinaigrette mixture. Cover and chill in the fridge for 2-3 hours before serving.