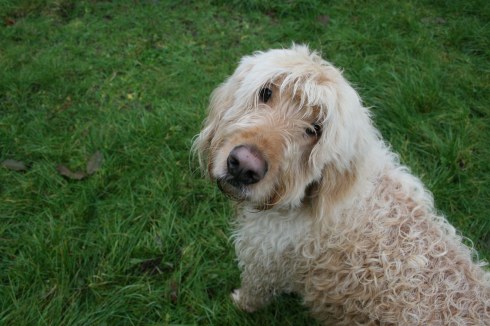 My friend Stasia and I were talking the other day about her family’s tabby cat, Mr. Bill, who sadly now requires twice daily injections to help with his Diabetes. This was strange to me, as I thought cats had no real worries in this world except Halloween firework pranks and quirky owners who knit them tiny socks and give them names like Blinky or Mr. Whiskers. This got me thinking about some of the other real or imaginary health consequences of not just domesticating animals into trained house pets, but subjecting them to our own injurious habits and lifestyles. Case in point: my brother’s voluptuous and wrinkled bulldog whose pastime is watching the Sopranos from his indented side of the couch while scratching his crotch. Who knows the countless ways that an unnatural lifestyle manifests itself in the health and psyche of animals, or of humans for that matter.

I was reading an article online talking about the growing popularity of prescribing antidepressants to house pets. The article mentions parrots and other highly social and intelligent birds as being particularly susceptible to depression and suicidal tendencies (as exhibited by the tearing out of its feathers, in case you were curious how a bird might try to do itself in). For dogs, antidepressants now come in beef or chicken flavours. Although controversial, the shuffling of our own psychological demons into the animal kingdom is not at all surprising, considering how much their lifestyles and hairdos are starting to resemble our own. I wouldn’t be shocked to learn that somewhere in North America right now, a German Shepherd with a bouffant is eating its owner’s burger and fries, trying to fill an emotional hole from the loss of last night’s hockey game. I don’t feel so badly for cats, who are too aloof and lethargic to have even noticed that they’ve gradually traded in the arid savannahs of Africa for the expanse of couch or kitchen floor. Dogs on the other hand, are not often as fortunate; having to stagnate in living rooms for most of the day with not nearly enough fresh air and outdoor time. My mom’s dog, however, is one of the lucky few.

I’m spending the weekend on Saltspring Island for a wedding and also for some quality time with family. Part of the enjoyment of first pulling into the driveway at my mom’s house is having our Golden Doodle, Dylan, come prancing and bounding down the gravel path to greet me, pushing past the two baby doll sheep that graze in the front yard, barely looking up from the grass to take notice.  Dylan’s lucky enough to live on such a large property; and although he’s forced into monthly grooming and shampoo appointments to keep him from reeking like sewage from his daily meanderings in the pond, he is essentially a wild and care-free farm dog.

I made dog treats this morning for Dylan and although peanut butter isn’t naturally part of a dog’s diet, at least I know exactly what went into these biscuits and can pronounce the ingredients. He definitely did not complain and quickly snatched them from my hands.

2. In a food processor, mix together the flour and cornmeal. Then add the remaining ingredients until well blended.

3. Remove the mixture and combine into a ball, then place on lightly floured work surface. Using a rolling pin, flatten out the dough to ¼ inch thickness and use cookie cutter shapes to cut out desired shapes. For some reason I had a cookie cutter in the shape of a dog, which I admit is strangely cannibalistic to feed to a dog, but it was nice to look at. 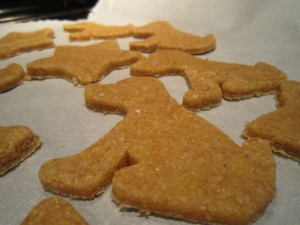 My name is Mike and even though I’m not always a gentleman, it’s safe to say I am in love with food. Like my more famous namesake, the kid on the cereal commercial from the early 80′s, I had an ability to eat just about anything and “like it.” I’ve become a tad more discerning since my toddler phase: I prefer Pinot Noir to the customary Shiraz my parents liked, I no longer eat parmesan cheese sprinkled from a container, and can pick out which ingredients I like or don’t in a recipe by smell alone. I blame my Lebanese heritage, my large Lebanese nose (all the better for smelling with) and exposure over the past few years to some exquisite ethnic cooking styles and cuisine, as well as to some stunning, inspiring cooks who are family or friends. I’ve included a lot of their favourite recipes on this site, as well as a few of my own that have become my staples over the years. I hope you find something here that you like. Happy cooking! END_OF_DOCUMENT_TOKEN_TO_BE_REPLACED
This entry was posted on Saturday, January 22nd, 2011 at 2:45 pm and tagged with antidepressants, dog food, dog treats, peanut butter, pets and posted in Other. You can follow any responses to this entry through the RSS 2.0 feed.
« Dark Chocolate Dessert Risotto
Homemade Tomato Soup with Pesto Grilled Cheese »