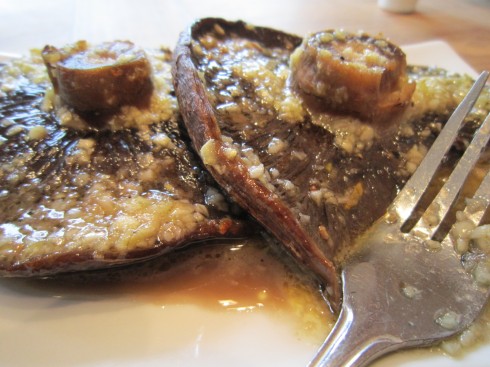 Portobello mushrooms are still foreign enough to me that I usually pass them by in the grocery store without much consideration, like kumquats or celeriac. I’m sure I’m not alone, as the cashier gave me a quizzical look when she peered in the brown paper bag at check out, unsure of its contents. I’m trying however to be bolder in the kitchen and to seek out new items in the produce section that would normally seem daunting. Fennel root and jicama, here I come!

Although portobellos have been strangers to my countertop in the past, I actually do like mushrooms; I eat them raw, toss them into risottos and stir fry’s and always admire the striking orange chanterelles in wicker baskets at fall markets, flecked with earth and dew. Portobellos (or Portabellas, if you prefer) are large, meaty and extremely versatile; and although they are reminiscent of the large toadstool from Alice in Wonderland, they are really just overgrown, brown crimini mushrooms in disguise.

I ate this dish for lunch, but it also makes for an excellent appetizer and visually-appealing side dish.  There’s a lot of garlic here – the recipe calls for an entire bulb –  but don’t cancel your evening plans just yet (although do make sure you have mouthwash on hand). The honey weakens the bite of the garlic, as well as adds such tremendous sweetness and flavour once cooked that the act of consuming it almost feels sinful. If I were a smoker, I would probably have lit up as soon I relinquished my fork…it was that pleasurable. Instead, I washed the dish down with a glass of our family’s home-made dessert Riesling wine, accompanied by a local Saltspring Camembert so fresh that it literally oozed with creaminess the moment I cut into it.

This recipe is so simple you’ll want to make it every week. The step that takes the longest is waiting for the oven to preheat to 500 degrees F. The ingredient quantities listed make enough glaze for 6 mushrooms, but I wouldn’t necessarily reduce quantities if you bought less than six mushrooms. I actually made more glaze than I needed and refrigerated the remainder; it can be used up to two weeks later for other delicious purposes, such as drizzling on vegetables (especially asparagus) before grilling or baking and also for marinating chicken.

Up to 6 Portobello mushrooms

10 cloves of garlic, peeled and chopped

2. Gently brush off any dirt from the outside of the mushrooms. Wash and pat dry if necessary. Slice off just the tip of the stem, if hard or dried. Place mushroom upside down on oiled baking sheet. 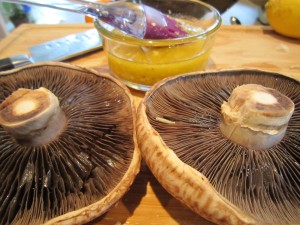 3. Prepare garlic cloves. Place all ingredients except mushrooms in a shallow food processor and pulse for 15 seconds, until well mixed and until there are no large pieces of garlic left.

4. Using a brush or a teaspoon, slowly pour out the liquid mixture onto the top-facing side. Be generous here, as the mushrooms will soak of the mixture quickly. I used about 3 tbsp on each mushroom.

5. Place baking sheet on top rack of the oven for 6-8 minutes. Check the mushrooms regularly after 6 minutes to make sure the mixture doesn’t burn. Remove from baking sheet with spatula or BBQ tongs and serve warm, either whole or sliced.

My name is Mike and even though I’m not always a gentleman, it’s safe to say I am in love with food. Like my more famous namesake, the kid on the cereal commercial from the early 80′s, I had an ability to eat just about anything and “like it.” I’ve become a tad more discerning since my toddler phase: I prefer Pinot Noir to the customary Shiraz my parents liked, I no longer eat parmesan cheese sprinkled from a container, and can pick out which ingredients I like or don’t in a recipe by smell alone. I blame my Lebanese heritage, my large Lebanese nose (all the better for smelling with) and exposure over the past few years to some exquisite ethnic cooking styles and cuisine, as well as to some stunning, inspiring cooks who are family or friends. I’ve included a lot of their favourite recipes on this site, as well as a few of my own that have become my staples over the years. I hope you find something here that you like. Happy cooking! END_OF_DOCUMENT_TOKEN_TO_BE_REPLACED
This entry was posted on Saturday, January 29th, 2011 at 2:49 pm and tagged with appetizer, garlic, glaze, mushroom, portobello mushrooms, recipe, side dish, vegetarian and posted in Appetizers, Side Dishes, Vegetarian. You can follow any responses to this entry through the RSS 2.0 feed.
« Mini Cinnamon Buns (Monkey Farts)
Bacon-Wrapped Halibut With Sauteed Apples and Kale on Creamy Polenta »