Or Wascally Wabbit Pie, if you can say it in an Elmer Fudd accent.

For over a week my friend Daniel and I had been putting our minds to a unique dish that we could cook up on our Sunday Night Test Kitchen and we both independently arrived at “rabbit”, which was an odd coincidence. Or maybe not. Last week was the start of Chinese New Year and also the Year of the Rabbit, which means that if you were born now you’d be moody, detached, self-assured and stubborn, or so I read. A Chinese-Canadian colleague assured me that eating a zodiac animal wouldn’t actually be offensive or sacrilegious, so we were safe to proceed with the meal without risking death threats from moody and detached newborns. Rabbit also seems a fitting choice for those of us who live in Victoria, where hospital grounds and university campuses are littered with so many Bambis and Thumpers that they resemble a Disney cartoon.  This has been of particular concern to the University of Victoria (a.k.a. Watership Down), afraid that the many rabbit warrens chiselled like refugee tunnels under the soccer field would give way during a game. The rabbits are also a huge distraction to students during exam time, with their cute antics and tennis-ball shaped babies. Instead of using the rabbits in the cafeteria as the mystery meat of the week, the University tackled this pest problem by shipping scores of bunnies to other locations, including a rabbit sanctuary in Texas.

In preparation for this meal, I didn’t sneak onto university grounds at night with carrots and a gym bag; instead I ordered two vaccuum-sealed, frozen rabbits from a farm in Quebec, which shipped to my local grocer here in British Columbia. They’re a little pricey (about $22 each), which is probably more than one might pay at the pet store for an actual living one.

The experience of eating rabbit was a little anticlimactic, although it tasted superb. I was expecting a taste that was gamey and new – a throwback to the meals our ancestors hunted and ate just a few generations ago. Instead, all I could think about was Hannibal Lector, comparing the taste to chicken. At dinner, Daniel recounted an anecdote about his grandmother growing up on a farm in rural Quebec. Her parents kept rabbits caged in the yard in order to feed the many hungry mouths when times were lean, although the children were lied to and told it was chicken. Apparently, even before Disney cartoons inculcated young minds into believing furry animals could sing showtunes and be our best friends, children still had an aversion to eating rabbit.

This recipe looks and tastes similar to chicken pot pie, although it’s made in a very traditional French Canadian way by baking the entire pot in the oven with a single pastry layer on top, instead of in double-crust pie form. Many pies, including my favourite Tourtiere or meat pie, were made this way in the 1800’s in Quebec. This meal is time intensive, but if you have 3 hours free with friends and have plenty of appetizers and wine handy, this will be enjoyable and unique to your guests. Bon Appetit!

Filling:
2 rabbits, hopefully already skinned and cleaned up (the ones I bought were roughly 1.2 kilograms each)

1/2 cup bacon, diced (for the grease, as rabbits don’t have a lot of fat themselves and need a bit of help)

2. Pastry: Stir together the dry pastry ingredients in a food processor or by hand. If by hand, cut the butter into the flour using two knives, in a criss-crossing motion until the butter becomes the size of peas. Or for a short cut, repeat these steps using a food processor, until crumbly, and save yourself a few minutes. Mix in the milk, a bit at a time, until the mixture becomes moist enough to form into a soft ball. On a gently floured surface, knead the pastry dough for a few minutes with the palm of your hand. Wrap well in saran wrap and keep in fridge until ready to use, in 2 hours or so. This can also be done the day before.

3. For the rabbit: Using a cleaver by whomever is the least squeamish, cut the rabbits into 3- or 4-inch sections. Don’t worry if you feel a little nauseated while doing this; it is a reminder that you’re still human and that you’re just a product of modern times. The cut sections don’t have to look perfect, as you’ll be picking the meat off the bones later on. Toss the pieces in the flour, to coat. 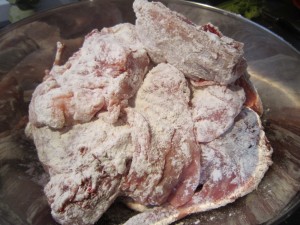 Cover the meat in flour

4. In a large skillet or frying pan, heat up the bacon until crisp. Remove the bacon and set aside. Add the oil to the melted bacon fat and on medium to high heat brown the rabbit pieces, about 4 minutes on each side.

5. Transfer the meat to a large oven-proof casserole dish, with the cooked bacon pieces. Add the white wine, celery, onion, thyme, salt and pepper and then enough water to just cover the rabbit. Cover the dish and bake at 325 degrees F for about 1 1/2 hours, or under meat becomes tender enough to easily remove from the bone.

6. Remove dish from the oven and remove the meat from the bones of the rabbit, ensuring it is in bite-sized pieces.

7. Return the meat to the casserole dish, along with the carrots, turnips and parsnips and return, covered, to the oven for about 15 minutes. Remove from the oven and add the frozen peas, then stir well. If you notice there is a lot of liquid in the dish, add a tablespoon at a time of flour and mix well, in order to thicken the mixture into more of a creamy sauce, then return to the oven for 10 more minutes. We sort of screwed up this step, as we were getting rushed towards the end because it was getting late and we were all ravenous. I know you’ll do better.

8. While the dish is in the oven, time to get the pastry rolled out. On the flour work surface, roll out the dough to about a 1/4-inch to 1/2-inch thickness.

9. Spread the rolled pastry across the top of the casserole dish or the top of wherever the mixture comes up to in the pot and then trim away any overhanging edges. There will probably be leftover pastry pieces, which you can roll back up, cover, and store in the freezer. Bake the casserole dish in the oven at 425 degrees F for 25 minutes or until the top is golden brown and the smell overwhelms your kitchen.

My name is Mike and even though I’m not always a gentleman, it’s safe to say I am in love with food. Like my more famous namesake, the kid on the cereal commercial from the early 80′s, I had an ability to eat just about anything and “like it.” I’ve become a tad more discerning since my toddler phase: I prefer Pinot Noir to the customary Shiraz my parents liked, I no longer eat parmesan cheese sprinkled from a container, and can pick out which ingredients I like or don’t in a recipe by smell alone. I blame my Lebanese heritage, my large Lebanese nose (all the better for smelling with) and exposure over the past few years to some exquisite ethnic cooking styles and cuisine, as well as to some stunning, inspiring cooks who are family or friends. I’ve included a lot of their favourite recipes on this site, as well as a few of my own that have become my staples over the years. I hope you find something here that you like. Happy cooking! END_OF_DOCUMENT_TOKEN_TO_BE_REPLACED
This entry was posted on Monday, February 7th, 2011 at 7:56 pm and tagged with chicken pot pie, parsnips, pastry dough, pie, rabbit, rabbit pie, turnips and posted in Breads and Quickbreads, Fish and Meat, Pies. You can follow any responses to this entry through the RSS 2.0 feed.
« Mouth-Watering Apple Galette
How to Make Fortune Cookies »

One response to “Rascally Rabbit Pie”