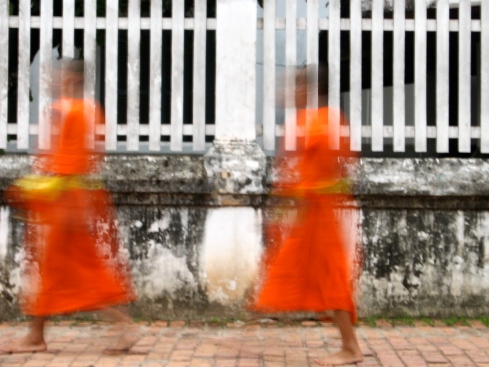 Woke up before the sunrise for another early departure to Phu Wua Park with Mr.Oot’s class. Our host mother Yort packed us up a bag of sticky rice and cooked fish for lunch, which wouldn’t be eaten until after several hours of hiking in the sticky heat. Back home I get paranoid when cooked food is left on the counter for more than 20 minutes, so I sensed this would end up being a beef jerky and Power Bar day. 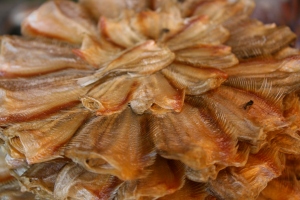 Fish for lunch...so good even the flies like it

After some campfire-like singing, in Thai, that energized the group and lasted long enough to dull my senses, we started on our uphill climb through still-wet foliage and over damp logs. The slippery rock faces threatened to plummet us to our doom, but we still managed to hang on until the top, where we met a superb view of the surrounding jungles leading down in the valley between the Laos mountains and Mekong river on one side, and on the other to Phu Tok and deep into Elephant country. I imagined a primitive scene, not too far away, where Tarzan swung from thick lliana vines over roaring elephants and cheetahs pawing madly at the air. I know I had the wrong continent, but the reality before me was probably not too far off. 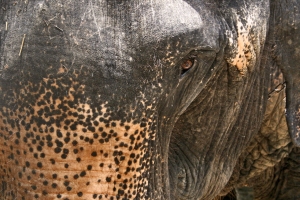 Oot led us afterwards off the beaten track, along winding streams surrounded by phallic-looking carnivorous plants which made me giggle. We joined up with the rest of the group, already wet and submersed in a nearby river which looked cool and refreshing. We were quickly thronged by gaggles of kids brandishing their teachers’ cameras. Using broken English, one teacher explained that these kids had never before taken a picture with white people. Soon after, we had them lined up in a queue, waiting their turn to put an arm around us and give the peace sign to a ready lens. We felt like Mickey and Minnie at a theme park, and gave some serious thought to charging a fee. We traipsed back together, all 70 or so of us in single file, through the jungle like African refugees. 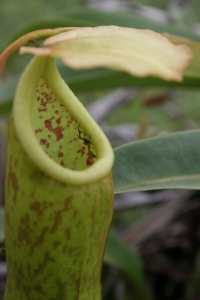 Came back home, salivating at the chance of jumping into the shower, only to discover the water didn’t turn back on until 6pm. Instead, I settled with pouring buckets of cold water over my head, as I imagined bathing in the Ganges to be. We cleaned the room and I squished ants on our bed with my thumb, vindictive over the day’s mosquito bites and fly molestation.

We walked 10 or so homes down to Mr Bunleod’s house, where we tend to be the most productive on the computer. With the past few days of incessant rain, it has been difficult to clean our clothes, so I have been forced into my last pair of pants: my new, thai-style wrap-around pants. I felt very self-conscious and feminine walking out in public wearing these, but the neighbours seemed to respond well. I saw mothers nodding their approval and aged grannies grinning while uttering the Thai version of “handsome, handsome.” I even started dragging my heels, in a lazy I-don’t-have-a-schedule-to-keep Thai kind of way. I blended in so well the dogs didn’t even take any notice of me.

We arrived at the house and immediately village children sensed our presence and threatened to thwart our peaceful afternoon of hopeful reading. We gave them some crayons and torn paper to draw with, in the hopes that they wouldn’t ask us to use the computer for pinball. As I write, a new ruffian has seated himself, crosslegged next to me, sniffling and watching me type. I will not give in, however cute his expression. In about an hour and half Yurt, our Thai mom, will come out on the front porch, announcing dinner and swatting these kids away like flies, but until then I don’t have the heart to tell them to get lost. I like them alright, but I am craving some alone time. The noises of the village are many: chickens, horny roosters, cow bells (wooden of course), tractors, hammering, the endless pounding of chillies in mortar and pestle fashion for dinner, or the hacking off of hog-heads, motorcycles humming, and some unseen little girl next door ringing her vexing bike bell to get her mother’s attention. 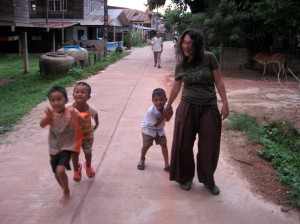 Went to sleep with a headache surely caused by dehydration and awoke 30 minutes later to an empty room. Found Sonia outside, with the old man next door, learning how to make a basket from shredded bamboo used for holding eggs. 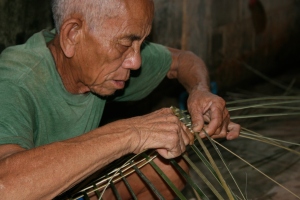 Woke up to discover a troupe of ants marching by the hundreds through the garbage-festooned streets of our bedroom floor and into my knapsack. I went on a genocidal rampage with a broom and my foot until I was satisfied I had killed most of their brethren. At 8 am, Bunleod came to get us to take Sonia rice farming at the neighbour’s field. I took one look at the muddy water and visualized it teeming with creatures and parasites from Biology 11 and then pictured them entering my body through the cuts of scrapes on my feet. A rice paddy is not an ideal place for a hypochondriac such as myself. While Sonia waded unknowningly in the stew of hygiene-apotheosis, I photographed from the dry sidelines, a keen but wary observer. **Just a side note and a bit of an I-told-you-so: although probably just coincidence or poor luck, 3 weeks later she contracted Dengue Fever. 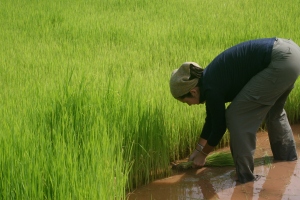 I learned that each blade of rice plant can create 30 or so grains of rice. They are planted in groups of 5 or 6 and then these usually double in number with added shoots during the growing season; in the fall, they are harvested. This farmer’s field amounted to the equivalent of 100 bags of rice. 50 would be sufficient for their family of 5 for the year, and the rest would be sold. I wondered if I would still throw out leftover rice from dinner when I returned home or if I would thoughtfully contemplate the genealogy of each grain as I stared down at my sushi. 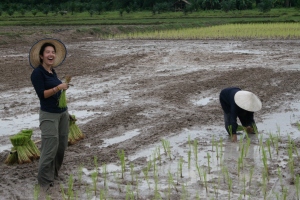 I have started a friendship with our neighbour’s cow, who I have affectionately named Bessie or Daisy, depending on my mood. She wanders about the town tethered to her male companion, but free to otherwise roam where she pleases. In the evenings she is always back laying in the middle of the dusty road, daintily chewing her cud. I enjoy patting her head, as I would a dog.

Such spectacular sights as this are beginning to seem normal to me now. The butterflies, which careen and flutter through the air like swallows, fade into the background, whereas before they had me wide-eyed. Women chewing red betel with blood-stained teeth and cracked lips, smiling as I pass, could be applying their rouge-a-levres for all I know.

Walking down the block is like shopping the fruit aisle at the grocery store – there are mangoes at every doorstep; durian, papaya, mangosteen and rambutan ripening on every branch it seems.  Children climb trees for their dessert here. The occasional banging from across the street, I learned, are heavy mangoes dropping from the tree onto corrugated roofs, ready to be eaten. I no longer search curiously when I hear the noise. And even now, as thunder tolls like a distant jet, I no longer get agitated. I know that soon the heavy rains will once again fall, slowly raising the level of the rice fields.

My name is Mike and even though I’m not always a gentleman, it’s safe to say I am in love with food. Like my more famous namesake, the kid on the cereal commercial from the early 80′s, I had an ability to eat just about anything and “like it.” I’ve become a tad more discerning since my toddler phase: I prefer Pinot Noir to the customary Shiraz my parents liked, I no longer eat parmesan cheese sprinkled from a container, and can pick out which ingredients I like or don’t in a recipe by smell alone. I blame my Lebanese heritage, my large Lebanese nose (all the better for smelling with) and exposure over the past few years to some exquisite ethnic cooking styles and cuisine, as well as to some stunning, inspiring cooks who are family or friends. I’ve included a lot of their favourite recipes on this site, as well as a few of my own that have become my staples over the years. I hope you find something here that you like. Happy cooking! END_OF_DOCUMENT_TOKEN_TO_BE_REPLACED
This entry was posted on Sunday, December 19th, 2010 at 9:17 am and tagged with Isan, thailand, travels, Writing and posted in Thai, Travels & Writing. You can follow any responses to this entry through the RSS 2.0 feed.
« Mango Blackberry Brulee
Moroccan Chicken Tagine with Prunes and Almonds »