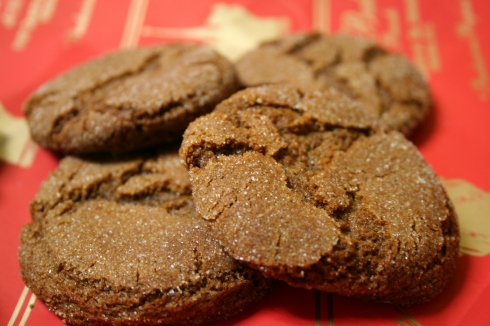 I don’t remember ever eating ginger molasses cookies growing up, though I do recall there always being a full, sticky carton of molasses in the cupboard. My brother and I used to dip a finger in to taste and then make a face, never learning apparently. It wasn’t until I first tried this cookie, years later at the local Starbucks, that I became a ginger junkie and a lover of molasses. Also, of late, whenever I go back to Quebec for a visit I get spoiled by family to the traditional French Canadian meal galettes de sarasin, or Buckwheat pancakes, which are rolled in pork and lard and dipped in nearly half a container of molasses it seems – these are to die for! Molasses redeemed!

I work with a great group of cooks and bakers on my office floor who are forever fattening the rest of us up with delicious treats – particularly around the holidays when different sugary platters beckon me every time I walk by the kitchen. Today someone brought in the chewiest homemade ginger molasses cookies I’ve ever sampled, so I immediately swiped a couple more and tried to greedily conserve my small stash throughout the day. Thanks Gaylynn. Bon Appetit!

1. Sift, or use a fork to mix the flour, baking soda, salt, cinnamon and ginger into a medium bowl. Set aside.

2. Cream the softened butter, brown sugar and 1/2 cup granulated sugar in a large mixing bowl with a mixer on high speed for about 1 minute. Beat in the egg and molasses, slowly at first and then on high speed for 30 more seconds. Scrape the sides continuously, as the batter will keep trying to escape from the bowl.

3. Mix in the flour mixture at low speed until well stirred and until it no longer has a “curdled” look. Cover the bowl and chill in the refrigerator for 1 hour.

5. Place 1/4 – 1/2 cup of granulated sugar on a small dish, to be used for rolling out and coating the cookies.

6. Form cookie dough into balls just bigger than a walnut (about 1/4 cup) then roll each cookie ball into the sugar. Place on greased cookie sheet, about 6 to the sheet as they will spread quite a bit while baking.

7. Dampen your fingers slightly with water and press down very gently on each cookie, to flatten and slightly moisten the tops. If you don’t have room in the oven for multiple baking sheets, keep the remainder of the rolled cookie balls in the fridge while the other baking sheet is in the oven.

8. Depending on the size of the balls, cooking times will vary. If balls are smaller than a walnut, try 8-10 minutes. If a little larger, such as the size suggested here, try 10-12 minutes. I personally like the cookies a bit bigger, so you don’t have to feel guilty about continuously going back for more. Rotate the baking sheet half way through to ensure even baking. Store in an airtight container to keep them from losing their chewiness after a few hours – though they likely won’t last that long without being eaten!

My name is Mike and even though I’m not always a gentleman, it’s safe to say I am in love with food. Like my more famous namesake, the kid on the cereal commercial from the early 80′s, I had an ability to eat just about anything and “like it.” I’ve become a tad more discerning since my toddler phase: I prefer Pinot Noir to the customary Shiraz my parents liked, I no longer eat parmesan cheese sprinkled from a container, and can pick out which ingredients I like or don’t in a recipe by smell alone. I blame my Lebanese heritage, my large Lebanese nose (all the better for smelling with) and exposure over the past few years to some exquisite ethnic cooking styles and cuisine, as well as to some stunning, inspiring cooks who are family or friends. I’ve included a lot of their favourite recipes on this site, as well as a few of my own that have become my staples over the years. I hope you find something here that you like. Happy cooking! END_OF_DOCUMENT_TOKEN_TO_BE_REPLACED
This entry was posted on Tuesday, December 21st, 2010 at 5:57 pm and tagged with chewy ginger molasses cookies, cookies, dessert, recipe, treats and posted in Desserts. You can follow any responses to this entry through the RSS 2.0 feed.
« Moroccan Chicken Tagine with Prunes and Almonds
Indian Butter Chicken »