Ten days into 2011 and my resolve to eat healthier has not yet abandoned me completely, except for the short-lived Ferrero Rocher that I found in my jacket pocket this afternoon. In addition to starting a 21-day yoga challenge today to whip myself into shape, tonight I also decided to delve into my ancestry for a healthy and creative salad  – Fattoosh. I don’t normally get much satisfaction from eating salads; they are too light and unfilling, too limp and without personality, and they always leave me with dressing down my shirt – though this Levantine dish which sounds liked a sneeze makes other salads wilt in shame. The ingredient list for this salad reads very much like that for its close relative, tabouli (also recommended), except Fattoosh uses romaine lettuce, ground sumac for tartness and hardened pieces of pita bread crumbled in, originally conceived as a practical use for stale bread besides using it as a middle eastern frisbee.

Sumac is an ingredient that is hard to come by here in Victoria – at least I haven’t found it – though you may be in luck if you live near a middle eastern grocer. Sumac always makes me think about an ill-planned entrepreneurial endeavour from my high school days, when my best friend Jon and I ground up the fuzzy red berries from the sumac tree in my backyard, rolled them up in cigarette paper, and sold them to our grade 8 friends under the brand name “Smacs”. They tasted pleasantly sour and fruity when inhaled, though the trend never caught on with our peers. I wouldn’t advise trying this at home, but I do highly recommend that you add this spice to your kitchen collection for the purpose of cooking. If you can’t find it, I’ve added a variation to the recipe using lemon zest, which tastes close enough.

3 tbsp ground sumac (or if you can’t find this, try 2-3 tbsp of grated lemon peel for the same sour flavour)

2. Place pitas on a baking sheet and bake for 6 – 8 minutes or until toasted and hard. Break into bite-sized pieces. 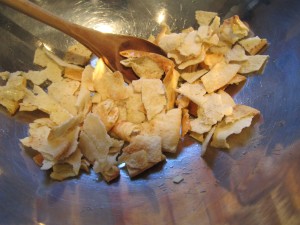 Toss the pita in the oil mixture

3. Combine the pita pieces, sumac (or lemon zest) and oil in large bowl and toss well until pita is coated completely. Add lettuce and remaining ingredients except lemon juice. Toss well. Before serving, drizzle with lemon juice. As the pita will begin to get soggy in the oil and juice after about an hour, it is best not to prepare this salad too long in advance.

My name is Mike and even though I’m not always a gentleman, it’s safe to say I am in love with food. Like my more famous namesake, the kid on the cereal commercial from the early 80′s, I had an ability to eat just about anything and “like it.” I’ve become a tad more discerning since my toddler phase: I prefer Pinot Noir to the customary Shiraz my parents liked, I no longer eat parmesan cheese sprinkled from a container, and can pick out which ingredients I like or don’t in a recipe by smell alone. I blame my Lebanese heritage, my large Lebanese nose (all the better for smelling with) and exposure over the past few years to some exquisite ethnic cooking styles and cuisine, as well as to some stunning, inspiring cooks who are family or friends. I’ve included a lot of their favourite recipes on this site, as well as a few of my own that have become my staples over the years. I hope you find something here that you like. Happy cooking! END_OF_DOCUMENT_TOKEN_TO_BE_REPLACED
This entry was posted on Monday, January 10th, 2011 at 7:00 pm and tagged with fattoosh, lebanese, pita, recipe, Salad and posted in Appetizers, Breads and Quickbreads, Lebanese Food, Side Dishes, Soups and Salads, Vegetarian. You can follow any responses to this entry through the RSS 2.0 feed.
« Koosa – Stuffed Summer Squash
Easy to Make Tuna Sushi Rolls »