Kalamata Tapenade with Tomatoes and Spinach 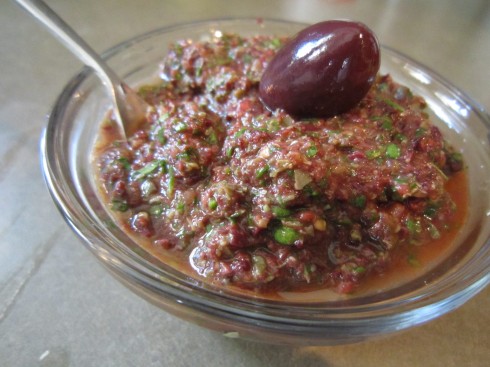 A few summers ago, my friend Luke had been bragging about salmon recipes he was experimenting with, which included daubing the fish with old fashioned mustard, on one occasion, or black olive tapenade. I was determined to try the tapenade recipe to prove my superiority over an obviously talented cook. I searched the grocery store, near the hummus section, but the only product in stock was a small container with a price so exorbitant that I nearly gagged. I was chastised by an elderly woman watching me as she saw that I gave serious consideration to the purchase. She was shaking her head and probably thinking what morons young people are. I had nearly forked out a good sum of money for a mush of capers and olives that literally takes seconds to puree. The woman explained the basic recipe to me, as I took mental notes, then she continued on her way.

I used to think that tapenade came from Italy, as I erroneously attributed olives with the land of vino, the Pope mobile and the Sistine Chapel, but it is actually the French who first had the insight of mashing up capers and olives to serve on bread. Perhaps there was a shortage of jam that year.

Like Luke, I’ve used tapenade many times on my salmon and am never disappointed. It’s so easy that it doesn’t really even warrant writing the recipe down: basically, spread the tapenade on the uncooked salmon, like a thick paste, then cook the salmon as normal. I also suggest eating tapenade, as the French had originally intended, with a freshly baked baguette. For my own take on tapenade, I use additional ingredients for taste and colour, and pureed them quite finely; you may prefer a coarser texture, in which case puree very briefly.

Puree all the ingredients in a food processor, in short bursts until the desired consistency is reached. If you want larger chunks of chopped olives and a coarser texture, add the olives last. 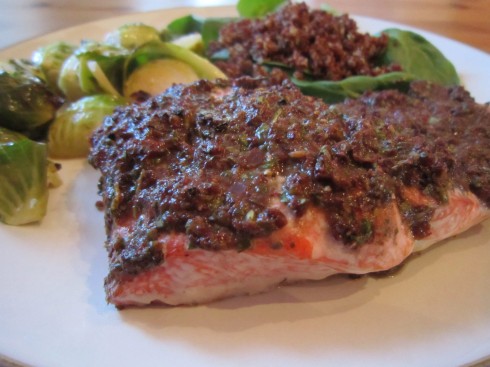 My name is Mike and even though I’m not always a gentleman, it’s safe to say I am in love with food. Like my more famous namesake, the kid on the cereal commercial from the early 80′s, I had an ability to eat just about anything and “like it.” I’ve become a tad more discerning since my toddler phase: I prefer Pinot Noir to the customary Shiraz my parents liked, I no longer eat parmesan cheese sprinkled from a container, and can pick out which ingredients I like or don’t in a recipe by smell alone. I blame my Lebanese heritage, my large Lebanese nose (all the better for smelling with) and exposure over the past few years to some exquisite ethnic cooking styles and cuisine, as well as to some stunning, inspiring cooks who are family or friends. I’ve included a lot of their favourite recipes on this site, as well as a few of my own that have become my staples over the years. I hope you find something here that you like. Happy cooking! END_OF_DOCUMENT_TOKEN_TO_BE_REPLACED
This entry was posted on Monday, May 30th, 2011 at 10:18 pm and tagged with french, kalamata, olives, spinach, spreads, tapenade, tapinade and posted in Appetizers, Side Dishes, Vegetarian. You can follow any responses to this entry through the RSS 2.0 feed.
« Moroccan Beef Tagine with Honey and Raisins
Best of Both Worlds: Chocolate Chip + Pudding Cookies »