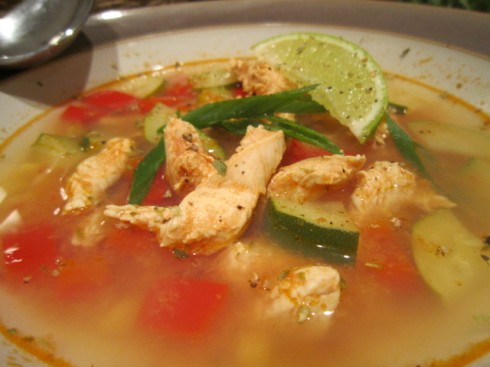 Whether its from the temperature getting colder and the air damper, or the stress of Christmas approaching, over the past 3 days I’ve been fighting off some bug. Today in particular has been the kind of day where I would have liked nothing more than to vegetate on the couch watching re-runs of Chuck and eating soup. Normally when I’m sick I gravitate to the traditional Chicken Noodle Soup, but today I felt like a variation that included a bit more kick to it – Chipotle peppers. I had a few of these peppers ziplocked in the freezer from the last time I made this recipe a few months ago. Normally they come 8-10 in a can and as each recipe usually only calls for 2 at a time, this is a good way to store them until needed.  This soup delivers a nice balance of heartiness (from the corn, chicken and zucchini), zip/kick (chipotle-style) and tartness from the limes making it the perfect fall or winter meal, or when in need of a pick-me-up.

1 to 3 chipotle peppers in adobo sauce, from the can (1 if you don’t like spicy food, 3 maximum if you don’t mind breathing fire)

1. In a blender, purée the tomatoes, onion, chipotles, garlic, and ½ cup of water 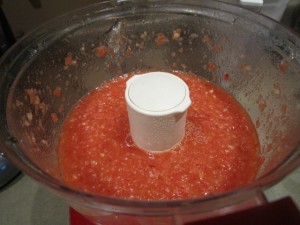 2. Heat the olive oil in a large pot over medium-high and add the puréed mixture from step 1, frying until it begins to darken in colour

4. Add the salt and broth to the pot and bring to a boil

5. Add the zucchini, corn, and red pepper and return the soup to a boil.  Reduce the heat and simmer for 20 minutes Stir in the fresh oregano and season to taste

6. Serve each bowl with a piece of fresh lime for squeezing the soup

My name is Mike and even though I’m not always a gentleman, it’s safe to say I am in love with food. Like my more famous namesake, the kid on the cereal commercial from the early 80′s, I had an ability to eat just about anything and “like it.” I’ve become a tad more discerning since my toddler phase: I prefer Pinot Noir to the customary Shiraz my parents liked, I no longer eat parmesan cheese sprinkled from a container, and can pick out which ingredients I like or don’t in a recipe by smell alone. I blame my Lebanese heritage, my large Lebanese nose (all the better for smelling with) and exposure over the past few years to some exquisite ethnic cooking styles and cuisine, as well as to some stunning, inspiring cooks who are family or friends. I’ve included a lot of their favourite recipes on this site, as well as a few of my own that have become my staples over the years. I hope you find something here that you like. Happy cooking! END_OF_DOCUMENT_TOKEN_TO_BE_REPLACED
This entry was posted on Wednesday, December 15th, 2010 at 6:32 am and tagged with chicken, Chicken chipotle soup, Soup and posted in Chicken, Soups and Salads. You can follow any responses to this entry through the RSS 2.0 feed.
« Thai Green Curry with Chicken
Saltspring Island Christmas Party and Feast »