Yes, I know there is at least a week and a half to go until Christmas, but that has never stopped my mom from rummaging through her decorations each October and bedecking her Saltspring Island home with Christmas cheer while the rest of the world is still thinking about pumpkins and vampires. She starts exuding Christmas even earlier than Wal-Mart, which is saying something.

I have to acknowledge though that she always has the best decorated home at Christmas time; it is as flashy as Vegas, though tasteful and without an Eiffel Tower. She has a dozen or so Christmas trees around the house, each themed and with a purpose. The “sheep” tree is adorned with hundreds of miniature stuffed sheep and rolled balls of wool that she sheared from two of the family sheep “Curly and Whirly”. Another tree consists only of tear drop-shaped ornaments, while a third has so many decorations made from cinnamon sticks that one can’t walk within 5 feet of it without craving cider. 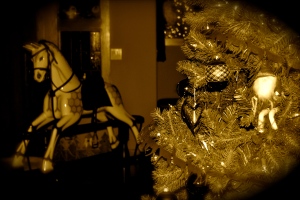 In addition to her trees and many lights, my mom is also known for her lavish Christmas parties, where the food spread and wine supply is endless. This year was no exception: last weekend she hired two local high school students to play the guitar and fiddle for entertainment and she hired Bruce from Saltspring’s renowned Bruce’s Kitchen for catering. I was brought in from Victoria for cheap labour: serving, pouring refills of wine and the part I was looking forward to most, getting to watch Bruce at work and plate 18 dishes of each course for him.

The menu Bruce had created was outstanding and true to the slogan of his restaurant “Farm to Table” he tried to source as many ingredients locally from Saltspring or Vancouver Island as he could considering the season. I couldn’t get the recipes from him, as many of the dishes were surely secrets he had carried with him since his early days of cooking. But I did ask a lot of questions, as I was genuinely intrigued, so will attempt to pass on what I gleaned.

Many of these items I had never heard of before; gravlax for starters. It sounded more akin to a laxative than a salmon dish. Somewhat similar in taste to smoked salmon, I found, gravlax is actually salmon fillets cold cured using salt, sugar, dill and alcohol. Although not time consuming to make, Bruce told me, the gravlax curing process takes roughly 3 days in all, after which time the fillet is thinly sliced and served, usually on bread or in this case accompanying lime and cilantro prawns and tuna flank on blinis. For a gravlax recipe that looks similar, follow this link. 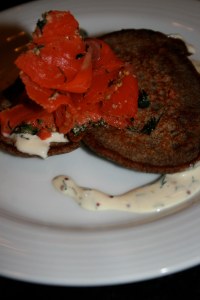 Accompanying the gravlax on this dish were prawns that had been soaking overnight in a beautiful chili-lime marinade and tuna flanks with fennel seed that at first glance appeared to be sitting in a tub of olive oil. Bruce explained the technique for preparing the tuna. Normally one would sear tuna briefly on all sides for under a minute. In this case, however, he used hot olive oil poured onto the fish to cook it. He heated a jar of olive oil that he had previously used for preserving lemons over several months and that were now infused with a mellow citrus flavour. Pouring this over the fish not only partially cooked the fish, but transferred the lemon taste to the tuna. He then rubbed each piece of fish with local sea salts and fennel seed for a subtle hint of anise. 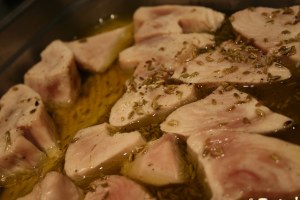 His appetizers were equally delicious. The turnover was made using puff pastry filled with mostarda, which is an Italian style chutney using a combination of fruits (in this case, some local island figs and apples) preserved in a sweet honey syrup with a bit of extra kick on loan from mustard seed, powder and oil. The entire thing was baked with crumbs of Moonstruck Bleu cheese (local Saltspring Island cheese) and then sliced into sections and served alongside the white bean hummus on cucumber. People were cautious not to fill up on the appetizers alone, as tempting as it was. For a basic mostarda recipe, try this link.

Mostarda turnover with Moonstruck Bleu cheese, ready for the oven

The coup de grace of the evening and main course consisted of local farm-raised beef tenderloin and braised short rips rubbed in cocoa and espresso (if I remember correctly) served on mouth-watering risotto of local fall vegetables and kale. I saw several people plead for seconds – the high school musicians even skipped dessert and had a third helping of this dish.

For dessert, guests managed to find room for a slice of dark chocolate yule log or buche de noel (complete with meringue mushrooms), accompanied by oatmeal crepes filled with apples and then folded into quarters, sliced and topped with a scoopful of Bruce’s own blackberry sorbet. For a wild berry sorbet recipe, try this link. I was fortunate enough to bring a doggy bag of leftovers home with me that lasted for several lunches and made work colleagues envious.

Thanks Bruce and hosts for a fantastic meal and enjoyable company!

Tierney and Brian, too stuffed to move

My name is Mike and even though I’m not always a gentleman, it’s safe to say I am in love with food. Like my more famous namesake, the kid on the cereal commercial from the early 80′s, I had an ability to eat just about anything and “like it.” I’ve become a tad more discerning since my toddler phase: I prefer Pinot Noir to the customary Shiraz my parents liked, I no longer eat parmesan cheese sprinkled from a container, and can pick out which ingredients I like or don’t in a recipe by smell alone. I blame my Lebanese heritage, my large Lebanese nose (all the better for smelling with) and exposure over the past few years to some exquisite ethnic cooking styles and cuisine, as well as to some stunning, inspiring cooks who are family or friends. I’ve included a lot of their favourite recipes on this site, as well as a few of my own that have become my staples over the years. I hope you find something here that you like. Happy cooking! END_OF_DOCUMENT_TOKEN_TO_BE_REPLACED
This entry was posted on Wednesday, December 15th, 2010 at 5:54 pm and tagged with christmas, party, Saltspring island and posted in Memorable meals. You can follow any responses to this entry through the RSS 2.0 feed.
« Chicken Chipotle Soup
Brown Sugar Mustard Glazed Salmon »