Arriving back in the village after a few days of rest and relaxation in Nong Khai, a slightly larger town 2 hours away by jalopy, was refreshing. Nong Khai, which seemed fairly small a few weeks ago, is now Vancouver-big in comparison to Kham Pia village. There the outdoor markets, the fruit stands piled neck-high with rambutans and jackfruit, and the local 7-11 with its heavenly air conditioning and slurpees was reminiscent of the hustle and bustle of Robson Street, downtown Vancouver.

A pile of jackfruit....bet you can't eat just one!

We had left the village for 2 days to seek some of the minor luxuries that Nong Khai, being slightly larger, could offer, such as a shower and flushing toilets. It is eye-opening and a tad shameful to know that the majority of Earth’s 6.5 billion don’t have access to the kind of bathroom comfort, let alone running water, that Westerners enjoy. 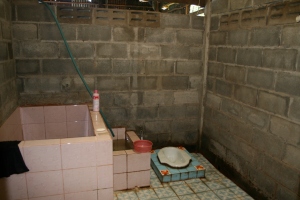 A whole new meaning of the word "squatters"

Coming back to the village and its endless fields of rice paddies, familiar faces made me smile, as did the farm sounds we had grown accustomed to. When we pulled in, riding on the back of a stranger’s pickup truck, I felt like we were part of a Royal procession. Children running behind the truck heralded our arrival with pointed fingers, shouting “fereng, fereng” – foreigner. 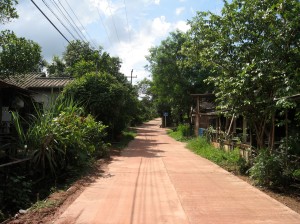 We had barely been back for a few hours and already there was trouble! A 15 year old boy had sniffed some gasoline from Mr. Bunleod’s grass mower and then had stumbled, intoxicated, into our house. Our homestay dad found him going through our room and then scolded him and searched him thoroughly for stolen goods, such as my month’s worth emergency supply of beef jerky I brought from back home. All of this was later explained by gestures over dinner and we laughed at the humour in it. Also that day, a baby had stolen a motorcycle and drove it through town, or so we understood.

That night we slept terribly. For endless hours, a tumult of thunder, lightning and goblets full of rain battered down upon our little hut. The sound was like tsunami waves crashing and is loud enough to mute every other noise. To communicate during storms, one has to gesture or yell into the other’s ear to be heard.

We have learned that villagers are very superstitious and precautionary when it comes to lightning. When the first flash of lightning appears overhead, one often sees people rushing for their homes to unplug anything electric – fans, radios or televisions. It is like the flicker of the house lights at a theatre back home, announcing the end of intermission and warning people to finish their wine. Villagers even go so far as to remove rings from their fingers and watches from their wrists. I was skeptical about this until we were told that 3 years earlier a water buffalo, dimly unaware of the metal bell around its neck, was struck dead in the field where it grazed from a typical evening lightning storm. Though a village feast had ensued that very evening to dine on the electrocuted carcass, later on cow bells were altered to be made of wood instead.

And so there I was, curled up in a quivering mass last night, with the image of the poor beast in my head. Lightning flashed across my closed eyelids and whether it was out of desperate fatigue or not, I removed the watch and ring from my person, so that I could fall asleep at ease. Even then, I suspected I knew how Dorothy felt, held captive in her Kansas home by the clutch of a tornado before being swept away to Oz.

We awoke still tired and feeling animal-like from sleep deprivation.  Mr Oot, a teacher from a village nearby, came by early and unannounced. We had just emerged from the bedroom moments before and had not yet had our breakfast of cold egg and instant coffee, so I was in no mood to socialize. He wanted us to be ready to join the group of 60 students up the hill at Phu Wua, a nature reserve that apparently contained wild elephants. He drove us in his nicely air conditioned truck through the narrow village dirt roads, nearly running over children, chickens and cows and almost side-swiping an 8-year old on a motorbike.

The children at the nature reserve anxiously eyed we two white fereng. I was nervous as Mr. Bunleod spoke first, because I sensed a moment of awkardness quickly approaching. We were later proven right, as he motioned us to the microphone and told us to teach the children English, as casually as if he were asking us to peel an orange. We had been given no preparation, no warning – we had mistakenly believed we were asked there to demonstrate some of the promotional material we were working on for the Park and village. Thankfully, Mr Oot saved us from further trepidation by pulling out an already prepared sheet of English dialogue, comical in its simplicity. “How do you say Phad Thai, in Thai?” was one example. “Excuse me, how do you say skytrain?”. I don’t know how useful the English translation of ‘skytrain’ would prove to be for the future elephant trekking guides and park rangers of the village. But if they ever found themselves in downtown Vancouver or Seattle, they would be just fine, I guess. 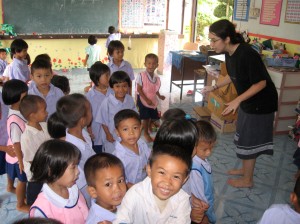 Afterwards, the day dragged on back at the homestead. Village children camped out at our house, protesting until we brought out the laptop computer for them to use and play with. They searched our databases until they discovered a very educational game of pinball. Either Sonia or myself always had to be nearby them when they used the laptop, in case they accidentally decided to erase other documents that we had open.

Later that afternoon, Bunleod walked us down the dry, dusty lane to his neighbour’s house. He wanted to proudly show off his village’s only rice grinder, used to pound down some of the locally grown rice into rice flour to make rice noodles and other common Thai dishes. Locals could grind rice down to a very fine powder or to a grainy mixture depending on what the recipe called for. My understanding was that this antique contraption was available for community use, much like municipal tennis courts back home. 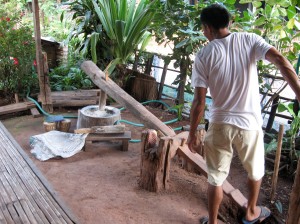 Dinner came, though I lost most of my appetite when I saw mangled frog parts being served in a soup. Through pantomime, I was assured it was delicious; but even after having sampled crickets and desiccated larvae from a street vendor in Nong Khai, I still could not stomach the thought. My Quebec relatives would be disappointed, as most of them would have considered this a seasonal treat. I ate Phad Thai instead, which was consistently good. Follow this link for a Phad Thai recipe.

Off to bed. We’re leaving for a day hike of Phu Wua mountain tomorrow at 8am with our skytrain-savvy students. We’ll see if it gets cancelled. The weather lately has been wet. The promotional brochures we’ve been working on are coming along nicely and our report is taking shape.

My name is Mike and even though I’m not always a gentleman, it’s safe to say I am in love with food. Like my more famous namesake, the kid on the cereal commercial from the early 80′s, I had an ability to eat just about anything and “like it.” I’ve become a tad more discerning since my toddler phase: I prefer Pinot Noir to the customary Shiraz my parents liked, I no longer eat parmesan cheese sprinkled from a container, and can pick out which ingredients I like or don’t in a recipe by smell alone. I blame my Lebanese heritage, my large Lebanese nose (all the better for smelling with) and exposure over the past few years to some exquisite ethnic cooking styles and cuisine, as well as to some stunning, inspiring cooks who are family or friends. I’ve included a lot of their favourite recipes on this site, as well as a few of my own that have become my staples over the years. I hope you find something here that you like. Happy cooking! END_OF_DOCUMENT_TOKEN_TO_BE_REPLACED
This entry was posted on Thursday, December 16th, 2010 at 7:11 pm and tagged with thai food, thailand, travels and posted in Thai, Travels & Writing. You can follow any responses to this entry through the RSS 2.0 feed.
« Christmas Snowy-Lava Cookies
French Toast with Pecans and Creamy Orange Syrup »